The wrong side of the tracks

Chances are, like many people, you spent at least some of Monday at home waiting for the trains to start running again. My corner of south London was left pretty much unscathed by the wind – old Jude hadn’t even managed to blow the lid off my recycling box – but there still weren’t any trains on my line until after 6.00pm.

We Brits are, of course, famously intolerant of weather-related excuses from train companies. For much of Monday, my Twitter feed was full of people going, ‘Chuh! Bloody trains!’ rather than sympathising with the poor souls who were having to clear all the debris off the tracks.

I’m sure much of this is down to the way train operators communicate with their passengers. They never give us any specifics, and they always use that awful, officious train company lingo; it’s all ‘inclement weather’ this and ‘signalling problems’ that.

Which is why I groaned when I spotted this poster Southeastern Railways have up in London Bridge station at the moment. 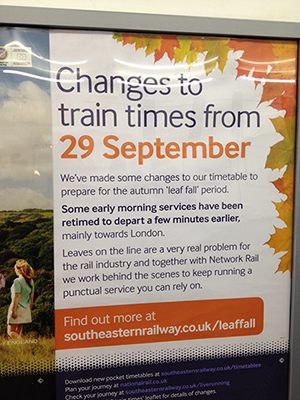 The big mistake they’re making here is refusing to acknowledge the elephant in the room: that – along with ‘the wrong kind of snow’ – the phrase ‘leaves on the line’ is a complete joke among British commuters. You turn up late to work, and your colleagues say, ‘Leaves on the line again, eh? Chuh!’ and roll their eyes.

Personally, I’ve never understood what the problem is: if I’m walking along the pavement and I encounter some leaves, I just take it in my stride. And I’m just nine-and-a-bit stone’s worth of human lady – imagine what a couple of hundred tons of speeding metal could do to a pile of foliage.

Except it’s not dry leaves that are the problem, as I discovered when I visited Southeastern’s dedicated leaf-fall web page (yes, I know). It turns out that when trains run over leaves and squash them, they turn into a ‘resin-like substance’ that’s the railway equivalent of black ice. I don’t know about you, but that would certainly make me think twice about getting on a train of an autumn morning.

As it stands, the poster sounds po-faced and whiny: ‘Seriously, you guys, this isn’t funny, okay? Leaves on the line are actually a big problem for us, yeah?’ But unless they tell us why – actually give us some useful information – we’re just not going to care.

If they’d explained the black ice thing there and then, I might have felt a bit more well-disposed towards Southeastern. Instead of thinking, for at least the tenth time that day, ‘Chuh! Bloody trains.’